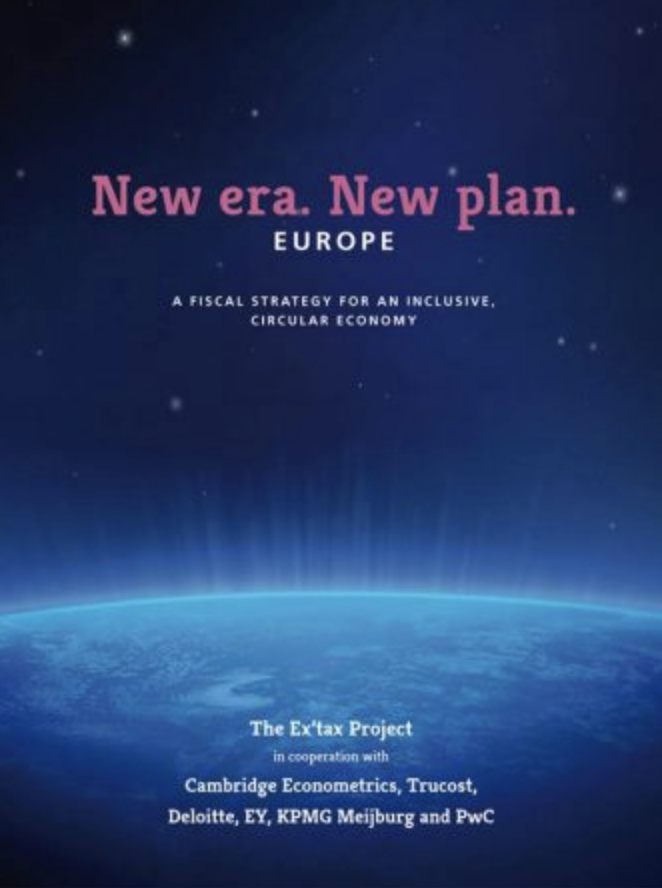 By 2020, switching taxes from labour to pollution and resource use could increase GDP levels by 2%, create 6.6 million more jobs, and cut carbon emissions by 8.2%, according to new research

BRUSSELS – The European Union and EU member states would benefit from higher economic growth, more jobs and a cleaner environment if governments shifted taxation from labour to pollution, the use of natural resources and consumption. It would result in 2% higher GDP levels, additional employment for 6.6 million people, and reduced carbon dioxide (CO2) emissions of 8.2%, all by 2020. These are the findings of an extensive study ‘New Era. New Plan. Europe. A fiscal strategy for an inclusive, circular economy’ presented today in Brussels by the independent Dutch think tank The Ex’tax Project Foundation, in cooperation with Cambridge Econometrics, Trucost, Deloitte, EY, KPMG Meijburg & Co and PwC.

The study presents a tax shift scenario that matches EU aspirations to simplify tax systems and relieve the tax burden on labour in each of the 27 EU Member States under review. Cambridge Econometrics was asked to model the macro-economic effects of this scenario across the European Union using the E3ME model. The key message from the results is that it is viable to design policies that reduce resource use and carbon emissions, while at the same time stimulating the economy and creating jobs.

Impact across the board

Over the course of five years (2016-2020), the scenario shifts a cumulative € 1,716 billion of tax revenues from labour to natural resources and consumption (2015 prices). During this period, compared to baseline, the scenario saves 1,038 million tonnes of carbon, 219 billion cubic meters of water, 194 million tonnes of oil equivalents of energy resources (12 types of energy sources combined), and € 27.7 billion on the EU energy import bill.

Over € 17 billion in social capital value will be added through improvements to health associated with reduced unemployment, as by 2020, in the scenario, 6.6 million more people can be in employment. The full benefits of reduced unemployment are likely much larger, including improvements in income security, economic inequality, poverty risk, social stability and cohesion, and the creation, loss and maintenance of human capital.

Hector Pollitt, Head of Modelling at Cambridge Econometrics: “This study assesses the effects of a highly ambitious shift in taxes from labour to the consumption of resources across Europe. The results from the modelling exercise show that European countries could cut resource use while simultaneously boosting employment levels, at no additional public expense.”Dr Richard Mattison, Chief Executive Officer, Trucost, said: “Shifting taxes from labour to pollution, resource use and consumption can help EU countries boost economic growth, create many new jobs and achieve commitments to minimise climate change under the Paris Agreement, as well as protect constrained environmental resources. Trucost’s expertise in putting a monetary value on positive and negative environmental impacts provides critical insight to help policymakers understand the avoided environmental costs of the tax shift alongside traditional economic measures. In addition to the € 842 bn increase in GDP across the EU, Trucost valued the environmental benefits at € 260 bn.”

The scenario applies ‘the polluter pays’ principles by introducing additional excise duties on fossil fuels and taxes on carbon, water and electricity, for bulk users. It also includes a raise in VAT rates. The combined revenues of these measures are assumed to lower the tax burden on labour. Income tax and social contributions paid by employees and employers are reduced (without changing the social protection base). Also, an investment in employment is made through a payroll tax credit for companies that effectively increase employment and a payroll tax credit for circular innovation. Finally, a 0% VAT rate is introduced for labour-intensive services (maintenance and repair). The scenario is designed to be revenue neutral. This means that there are no direct stimulus or austerity effects. In the model, the measures are introduced in 2016 and are scaled up linearly to full value by 2020.The Ex’tax Project is funded by MAVA Foundation, DOEN Foundation, Adessium Foundation and Triodos Foundation.For more information please contact:
Ms. Femke Groothuis / The Ex’tax Project / femke@extax.nl
Mr. James Richens / Trucost / james.richens@trucost.com
Mr. Hector Pollitt/ Cambridge Econometrics / hp@camecon.com