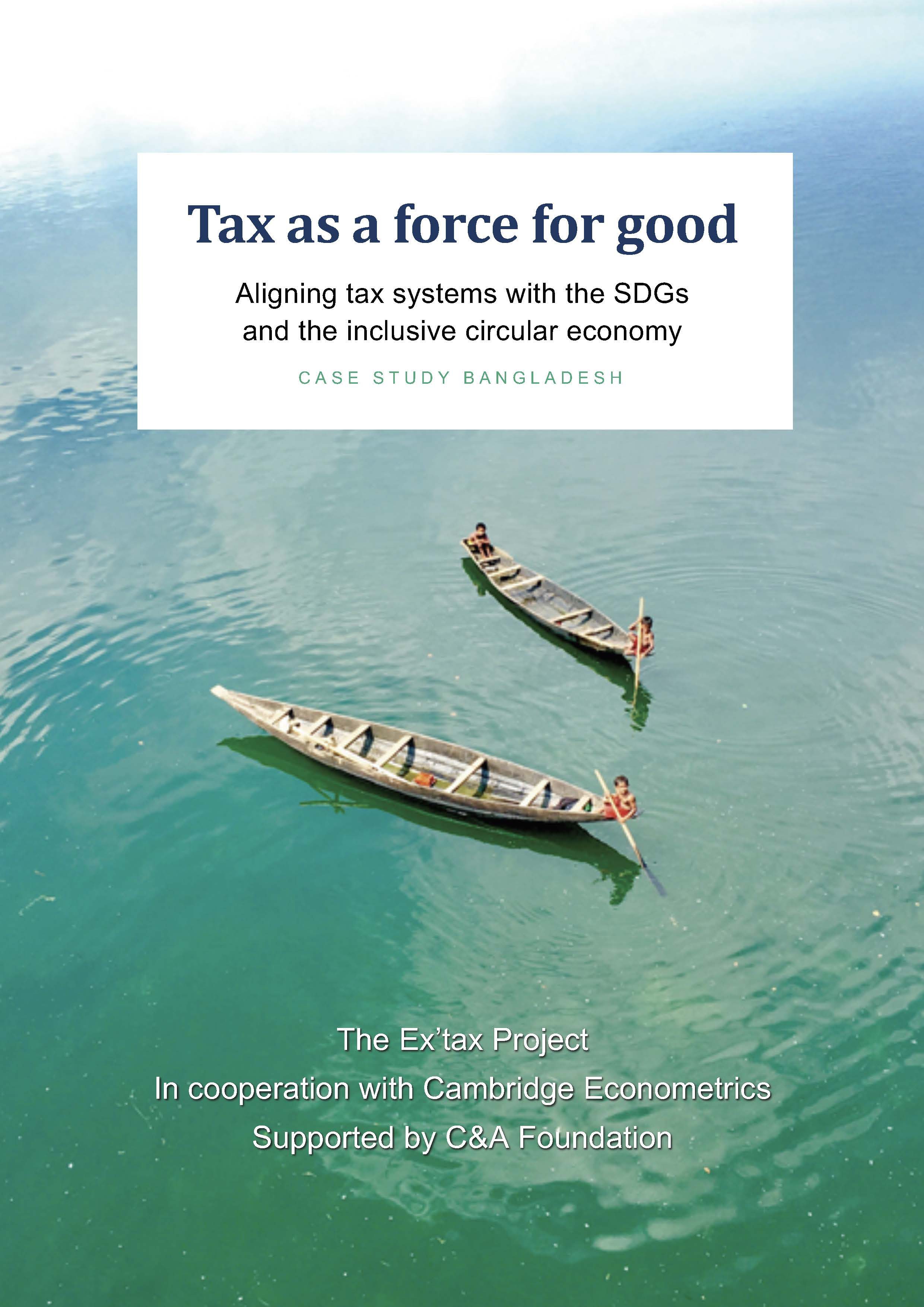 UTRECHT,  September 24, 2019 – “We should tax pollution, not people”, advocates United Nations Secretary-General António Guterres. New research by the independent Dutch think tank The Ex’tax Project, in cooperation with Cambridge Econometrics and supported by C&A Foundation demonstrates how such tax reform – putting a price on pollution and using the revenues for social impact – could benefit low-income countries.

According to the study ‘Tax as a force for good: aligning tax systems with the SDGs and the inclusive circular economy. Case study Bangladesh’, it is possible to design policies that reduce resource use and harmful emissions, while at the same time stimulating the economy and creating jobs as well as higher incomes for those who need it most.

Cambridge Econometrics, a UK-based economics consultancy, has modelled the impacts of two preliminary scenarios in Bangladesh. These include putting a price on carbon emissions and abolishing fossil fuel subsidies, while using the revenues to invest in clean technologies, infrastructure and social spending.

Bangladesh was chosen as a case study country as its vulnerability to climate disruption could displace more than 30 million people by 2050. Also, the country has one of the largest gaps between tax revenue and GDP, which means that there is a need to mobilise domestic resources.

The modelling suggests that by 2025, tax reforms could lead to higher GDP and employment levels, while reducing carbon emissions and energy imports. The transition can be highly progressive when revenues are mainly used to increase social spending.

Over the 2020-2025 period, both scenarios would add USD 6.9 billion (in the Infrastructure Scenario) and USD 7.8 billion (in the Social Scenario) to GDP, compared to business as usual (2017 prices). Additional results show that, in both scenarios, Bangladesh could create over 500,000 new jobs, see a significant reduction in carbon emissions of over 18 megatonnes, and save more than USD 400 million on energy imports. Phasing out fossil fuel subsidies could also potentially raise domestic resources by USD 4.7 billion, while a carbon tax could add an additional USD 10.6 billion.

For the textiles sector, which represents 80% of Bangladesh’s foreign earnings, a new tax model would have consequences. In all scenarios, the textiles sector shows a slight negative result in terms of production (0.24% and 0.15% respectively) by 2025. Overall, though, the Bangladesh economy would be stronger and more competitive in terms of carbon intensity and energy import dependency. Also, it’s important to note that the competitiveness impacts of the cleantech investments in the textiles sector (totalling more than USD 2.5 billion) are not yet captured in the model. As one of the most polluting industries, operating in a fast-changing global market, the global textiles industry is at a crossroads; continuing the linear model or shifting to circular models and adapting to changing circumstances. In light of global trends, tax reform could be a way to reduce risks and future-proof the sector.

“Detailed macroeconomic modelling in developing countries is difficult, but the new FRAMES modelling framework provides a powerful tool to assess policy. This study shows that the ‘polluter pays’ principle, when applied progressively by governments, could be a force for good.”

“Tax reform will be key to tackle the climate crisis. This study connects the dots and demonstrates that climate policy can be social policy.”

“Public policy – particularly through the creation of carrots and sticks – is essential to tackling big, systemic challenges such as climate change and improve the livelihoods of workers in a country, like Bangladesh, that is so important to the global apparel industry.”

In response to the report, Feike Sijbesma, CEO of Royal DSM said:

“Aligning tax systems with the SDGs anchors doing well for the world in our economic and financial system.”

NOTES TO THE EDITOR:

Sustainable inclusive growth is high on the agenda in Bangladesh. Climate disruption may displace more than 30 million people in Bangladesh by 2050. Pollution levels are high and renewable energy sources provide only a fraction of energy needs. Bangladesh has a large, growing and resilient population of 165 million, with 2 million young people entering the job market every year. The country has a proven track record of effectively addressing poverty and other challenges. Bangladesh has one of the largest gaps between tax revenue and GDP. Domestic resource mobilization will be key to financing progress towards the United Nations’ Sustainable Development Goals (SDGs). Bangladesh is the world’s second-largest exporter of clothing, and the sector represents 80 percent of foreign earnings.

For the purpose of this study, Cambridge Econometrics developed the ‘FRAMES: Bangladesh’ model, which is a version of the E3ME modelling framework that is designed to assess policy in developing countries. The two scenarios modelled in FRAMES showed that USD 4.3 billion in revenues could be raised in the year 2025, by 1) introducing a carbon tax of USD 30 per tonne of CO2 emitted by industries and the power sector; and 2) phasing out the oil subsidies and natural gas subsidies for industries and power generation. In the modelling, every year, the revenues are fully recycled. In the Infrastructure Scenario, all revenues are recycled through investments in clean technology and infrastructure. In the Social Spending Scenario (or Social Scenario), all revenues are recycled through investments in clean technology and social spending is targeted towards the lowest two income quintiles. In both scenarios, the clean technology investments are targeted towards the textiles sector. In the model, the measures are introduced in 2020 and are scaled up linearly to full value by 2024.

Detailed cumulative results over the 2020-2025 period:

In the Infrastructure Scenario, there are no explicit redistributive policies. The scenario is progressive, however, because the lower income quintile households experience smaller reductions in real incomes than those in the higher quintiles. In the Social Scenario, real income increases by 12.3% for the lowest income quintile, and 4.9% for the second lowest. Real income in the highest three quintiles reduces by 0.6%. This means that the transition can be highly progressive when revenues are mainly used to increase social spending, demonstrating that climate policy can be social policy.

Tax reform is key to tackle the climate crisis. Currently, governments tend to put a high or increasing tax burden on human labour (incentivising businesses to reduce labour input) while putting low or no taxes on the use of natural resources (which leads to carbon emissions, waste and pollution). Effectively tackling the climate crisis will require a shift from the linear ‘take-make-waste’ economy, towards an inclusive circular economy, which is regenerative and carbon neutral. Such economies are based on labour- and knowledge-intensive activities (e.g. repair, recycling and R&D), which could significantly contribute to job creation. This study connects the dots and demonstrates that climate policy can be social policy.

The study argues that smart tax policies could help countries to ‘leapfrog’ into the SDG era. Stakeholders, businesses, governments and NGOs should work together to turn tax into a ‘force for good’ and help build modern tax systems that enable prosperity based less on natural resource use and more on the abundance of human capacities and talents. This is the type of growth that can be sustained by generations to come.

The Ex’tax Project is a think tank focused on fiscal innovation for inclusive circular economies.

Cambridge Econometrics’ mission is to provide clear insights, based on rigorous and independent economic analysis, to support policy-makers and strategic planners.

C&A Foundation is here to transform the fashion industry. We give our partners the financial support, expertise and networks so they can make the fashion industry work better for every person it touches. We do this because we believe that despite the vast and complex challenges we face, we can work together to make fashion a force for good.